So it turns out that after my last post the Royals have worked their way back to the last place – the basement of the American League Central standings. I think they’re underperforming, and that they can do better, but they’ve definitely got some work to do. They’ve certainly got the talent to make it back to .500, and it will be a disappointing season if they don’t get there. String too many losses together and that’s what you get. 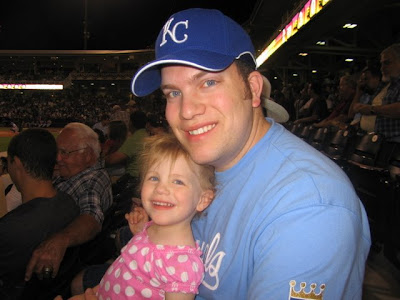 Just over a year ago, I wrote about why I’m a Kansas City Royals fan. A few days after that (one year ago yesterday), the Royals were no-hit by Jon Lester and the Red Sox, which marked the beginning of a twelve-game losing streak. Yesterday, the Royals scored four runs in a ninth-inning comeback. While this isn’t quite redemption for all those people out there who like to rip on the Royals, this season has been a start. Here are a few reasons why:

Back in March, we went to go see the Royals play at their Spring Training home of Surprise, Arizona. They had a bit of a comeback in their win against the Dodgers that day as well, although not quite as dramatic, and not as late in the game, but I was there to enjoy it.

Zack Greinke is amazing. He’s got a Sports Illustrated Cover, his walks are down, his strikeouts are up, and he sports a nasty slider.

More people are watching. You may have even seen them on ESPN this season, especially for that long stretch when they were in first place. They have a newly renovated stadium. Even with injuries to key players like Alex Gordon, they have a real Major League-level lineup, instead of Tony Pena or Ross Gload every day.

There are lots more changes as well, but they all add up to one thing: excitement. That’s something that hasn’t been around much for Royals fans since 2003, but it’s been steadily rising in the last year and a half. If you ask me, that’s a formula for a fun summer.

Facebook has been swept over by a wave of people posting 25 things about themselves. Are those guys too vain? Should I be upset at how much time they waste? I can’t believe they would post such stupid stuff. That’s the approach that Claire Suddath decided to take in her article about the 25 things craze on Time.com. She mocks the 25 things meme, and insults the lists that her friends have written. It could be all in jest, but it doesn’t come out that way. I’m convinced that Ms. Suddath is just a grumpy person. It’s certainly true that lots of people (including myself) that are on Facebook sometimes post things like this because they feel like showing off, but should we mock them for it? And if Claire doesn’t want to read all these things, why does she click on the links? If she doesn’t care about her college roommate’s sister, why is she friends with them? She says it’s because “Facebook is a loose social network” and that “a ‘friend’ on Facebook might translate to someone you’d barely recognize in real life.”, but she’s the one that chose to define her network that way when she accepted to add the invitation to be friends.

A much better approach is this story, shared with my by Margret on Facebook (gasp!). For those of you who are wondering, yes, I actually know Margret in real life. In this “Direct Reply to ’25 Random Things’“, Rex Huppke takes a different approach at making fun of Facebook users with his form-letter approach to crafting a response to a friend’s 25 things list. It works because of its lighter tone, rather than the grumpiness of Ms. Suddath’s article.

I guess it’s time to start my own 25 things list, but only after I finish my own grumpy letter:

There are too many states nowadays. Please eliminate three.

I’ve been using Wii Fit casually for a month now, and it has found its way into my exercise routine. I don’t use it quite every day, but it’s pretty close – for the last two weeks I only skipped one day of exercise – not all of it was on the Wii Fit, but it’s because of the Wii Fit that I got so close. That’s not too bad considering all the schedule changes we’ve had with a newborn in the house. Here’s what I like about it:

The first month with Wii Fit has been great. I’ve already lost over seven pounds, even with quite a few days of overindulgence. For me it has been a great motivator, and I plan to keep using it for many more months. Next month for me will be a big test because my coursework will be a lot heavier, but it’s so easy to incorporate into my regular routine that I plan on sticking with it.

I did pretty well at my goals this week. We finished reading The Lion, The Witch, and The Wardrobe yesterday (OK, so maybe it’s a slacker goal – the book was only about 100 pages, but still), and I worked out for at least 20 minutes on 5 different days, only missing Saturday for a full six, although I was exhausted after playing basketball for over an hour on Thursday.